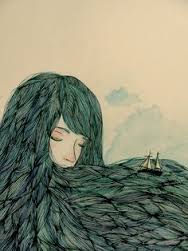 It all began when Hani came across a copy of The Alchemist lying discarded in the street while visiting her sister in Kenya. The book was in English, a language the young Somalian teenager didn’t understand at the time. She picks it up and flicks the book’s pages. The pictures are enough to entice her to carry it with her on her way to the shops. Collecting the needed oil for her sister’s home, Hani returns excited to recount her curious find. Her sister chided her, ‘Let me tell you what is more useful then what you have in your hand – what is needed from the store. You are always collecting papers!’

A seed had been planted towards this momentum of a journey, Hani’s personal pursuit of happiness, towards a country unknown; Australia.

If I didn’t know Hani Abdile’s story, I might have mistaken her for an innocent in her understanding of the world. It could be her youth, just turned 20, or it could be her animated kindred spirit. Both mask the experiences that now tie two entirely different cultures together within her; the Somalian culture of her birth that pushed her to run towards freedom and the culture of her adopted Australian home, that has given her hope, if not always a warm welcome.

Beyond the shine of her coffee coloured-cheeks and eyes so deep, she speaks with such strength and zest that she captivates those around her with her every word. My memory goes back to when I first met her in that small café in Newtown, the engagement was felt from us all as she read out poems. With a smile so warm, it seems an entire room is needed to contain its radiance. A smile that only fades for a moment, her hand forcefully stroking her forehead to brush her short curls when I ask ‘what is your story?’ She has lived the journey that carries the tales of the many, many lives put into the hands of the sea.

Let us return to this planted seed. Her home is Somalia, in the town of Kismayo. At home is where she would take every possibility to have an English literate friend read her The Alchemist. Eagerly as she recounts the events, she reaches for the book and pulls it out from under her single bed in her modest room in southern Sydney. Coverless. Soaked up with the traces of seawater, curled at the page’s edge. It too shows of its journey. She finds me the story that brought her here today. The story that reminds her of her own father. Santiago, the main character, an adventurous Andalusian young shepherd, finds himself in the company of a king. The king shares a story about a shopkeeper’s son who visited a wise man’s castle. The boy is asked to explore the beauty of this home, all while not spilling two drops of oil from a spoon in his hand. The boy returns with the oil. The wise man asks if he had observed all the beauties of the castle. The boy admits to have not. ‘Then go back and observe the marvels of my world’. He goes back, but this time he spills the oil. This parable translates into the secret of happiness; look outside yourself, but never forget to look within. Know who are. Hani’s father’s last words before her travels were ‘you can see all the beauty of this world, but never forget who you are, where you come from.’ This passage keeps her heart close to home.

As a young Somali woman she says her choices in her life were ‘ like running from a cheetah, into a lion’s mouth’.

Imagine your childhood innocence, being no different to the previous day or the many days before that. Yet everyone around you no longer sees your innocence. Your family, your cultural upbringing, the only society you know tells you it is time to grow up. It is time for a girl to become a woman through marriage. This is the destiny written for a child in Somalia this day.

It was this awakening that Hani, in her tender teenage years, had to be burdened with.

Being a teenager is late for a Somali woman to marry, as girls are married as early as nine years of age. Many Somalians believe that it is good fortune to marry a man with an income, rather than a poor man. So girls push themselves forward to wed before they get too old and undesirable often to men three times their age. It is an accepted conviction, a resigned justification to the limited opportunities in being a girl. And such arranged marriages are a blessing compared to the other fate that might befall a Somalian girl; finding herself in the hands of militants in the Al-Shabaab condemned to a life of violence and rape. Somalia is changing, but the country’s unrest still locks young women into the ways of the past. They are a burden. They have no prospects of an education or a career, just the weighing up of potential suitors by older relatives.

Hani’s destiny, however, was not set in stone once her family decided to support her in rejecting an arranged marriage. It was not a decision to be taken lightly. Her parents, six brothers and seven sisters, were threatened, violated and harassed in their home. It was then that Hani pleaded with her parents to put her future into the hands of the people smugglers.

‘The left and right hand are the same. You need one as much as the other,” she says, dismissing my comments about the profits people smugglers make from the misery of others. She speaks about those on her journey with tenderness. ‘I feared rape on my journey, but he (the people smuggler) was kind. He wanted to help me’. The smugglers themselves need money to survive and Hani needed them to survive.

‘Home was always the same. I could have died in the hands of a man I did not love, or died a sex slave. I would rather take the risk to die at sea. There are two options; die at sea, or survive.’

Hani is undoubtedly a survivor.

Her escape from Somalia was organised by a single smuggler, all the way to Australia. Although she found herself surrounded by different people each leg of the journey, it was always the same operation. The journey began by plane, destination Malaysia. From Malaysia to Indonesia she hid with five others in a small fishing boat that she described ‘like being in a coffin for 18 hours’. She tucked The Alchemist under her head as a pillow, to protect her neck from the hard wood. From Indonesia, she boarded with 45 people onto another boat. Set to sea for eight more days. As the Timor Sea seeped in, filling the boat, they were rescued just in time by the Australian Navy. Their boat was towed to Darwin and docked. The next day, Hani was taken with her fellow Sudanese, Somalian and Lebanese travellers to Christmas Island Detention Centre.

This was the resting place. 11 months in this one place, where the physical pain of the travels had long passed but the mental anguish takes a hold. Little known of what lays beyond the detention facilities, surrounded by the melancholic heartache of the many carried by sea. Only the flame of hope of having survived carries the imagination further into the realm of possibility.

Hani sits sipping from an oversized mug and eating a late evening snack from a breakfast bowl. A canvas hangs behind her, given to her by a support worker from a community detention centre, where she resided upon her release to Sydney. The rainbow coloured words say:

Your life is now

‘Your life is now’, repeats Hani, as she reads the canvas she has taken off the wall for me to see. The bearer of the gift has now passed. ‘She died in a car accident nine months ago.’ Hani hangs the gift on top of the bed head, treasured, and yet, another memory of loss.

Hani explains the fear that many Australians have of refugees arriving on their shores by boat. It is, she says, ‘like having a spider in your room, and then it hides away. You don’t know where this spider is anymore. Perhaps gone somewhere to die. You do not see it anymore. Like people seeking refuge, everyone fears so many people coming in, but no one actually sees them.’

In Australia, we hear of the refugee crisis in our weekly news. We are shown the despair of overcrowded boats, sinking boats, children like driftwood washed to shore. In many other nations, people are opening their arms to those crossing borders, those living in conditions where survival, even in the most basic of conditions, is no longer possible. Around the world, people are living in a climate crisis, warfare, violence and constant despair.

Yet, Australia accepts only some 15,300 refugees per year, and is the only place in the world to use offshore processing and mandatory detention. Australia’s 15,000 people a year is such a paltry contribution when there are 20,000 people seeking asylum every single day worldwide, according to the Salvation Army. Australia has some of the world’s harshest border protection policies and there is little understanding to why. Of the 11.7 million people around the world who are officially recognised by the UN as refugees, Australia houses just 0.3%. Hani is one of them.

The media readily criminalizes the victims who seek our help. There is little truth, little knowledge of what drives refugees to flee and little scrutiny of the turmoil that is created by the powerful few.

Hani understands what it is to feel like a criminal. With The Alchemist protected within four plastic bags, and tied around her wrist for the eight days of her sea journey to Australia, upon being rescued she is singled out. The Australian Navy, suspicious of what was in this bag, trained their bright lights on this young girl. Gloves were donned and scissors appeared. Snipping at the plastic, the book was revealed. She chuckles to herself: ‘They must of thought I was mad for travelling with a book that I couldn’t even read at the time’.

It is this zeal for life that is so breathtaking. She acknowledges with respect her ‘challenges’ throughout this journey, but accepts that ‘this is her story’.

Her temporary protection has not stopped her from pursuing the HSC through college, from dreaming of future projects or from becoming enthusiastically involved her community. ‘My treasure is education,’ she says.

Hani is a poet, a writer. This is how we bonded at our first encounter on King Street, Newtown. On the night of our meeting she showcased poems written by those inside detention centres, read out to the audience, by the audience. She represents Writing Through Fences here in NSW, an initiative started by her friend from Melbourne, who she met whilst detained at Christmas Island.

‘One word you write can change someone’s life. Change the world’, she exclaims.

She is determined to continue getting poems from within the centres, even though it is so hard. It takes numerous emails and Facebook messages to connect with those locked inside, who have little access to the internet. Hani explains, ‘Those in the centre think you are talking crap. That you want to hear their poems to enjoy with their tears’. I know it is more than that, it is a way people can connect to those separated, where the outside world don’t believe they exist. With every poem showing that they are important, and deserve to be free.

‘I have a lot of dreams. I want to go to university, publish a book and start an orphanage in Somali. Make them believe they can do better than an AK47. I want to help people here, but I don’t want to forget back home.’ 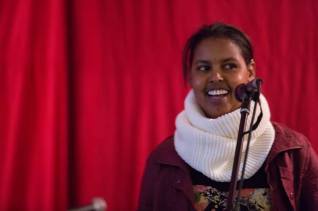